Unusual Event Venues Around the World

One of my hobbies - and hopefully the subject of my next book - is the study of ancient civilizations and the amazing special events that they used to hold. Some of these far surpassed anything that we do today in magnitude, creativity, and cost. Part of the fascination of these ancient events are the locations that were chosen for them. Many of the locations are still in existence today and are objects of awe by tourists and of intense study by archaeologists.

During my visits to these locations, I have photographed them and spent a lot of time questioning my guides and others about them, in addition to researching the literature. A recent trip to Egypt provided me with more fascinating places. One is known as the Step Pyramid complex at Saqqara, built for King Djoser by his architect, the high priest Imhotep, in the 27th century BCE (i.e. almost 5000 years ago!!). Part of this complex is a large courtyard that was used for a festival held in the 30th year of a pharaoh's reign to prove his ability to continue to govern. This festival consisted of a number of rituals and feats performed by the pharaoh and witnessed by dignitaries from all over the country, and included the requisite feasting, drinking, musical, and acrobatic performances that accompanied virtually all such events.

According to my guide, given the right budget and the correct procedures for obtaining permission to utilize the site, it would not be out of the question to actually use it for special events today. Now this would mean a lot of paperwork and some pretty adroit cross-cultural negotiation, but one can imagine the impact of holding an incentive event in such a location. Note the photo below of this complex. 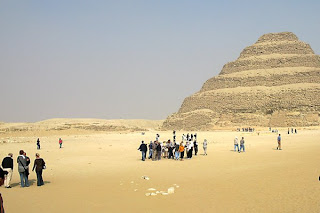 Similarly, the nearby Red Pyramid at Dahshur, the second largest pyramid in the world, has two beautifully restored burial chambers inside, capable of holding about 30 or 40 of your closest friends, that may make an impression if you were to use it for say a wedding. Again, a lot of negotiation and palm-crossing may be in order, but not out of the question given the fact that Egypt still has an incredible number of rich archaeological sites awaiting excavation and funding.

This situation is similar in other fantastic locales throughout the world, as you may see if you take a look at some of the photos of unique venues I have posted on the left side of this blog. Lots of negotiation and planning but what a way to celebrate in style and impress your guests. It could end up being a very happy marriage between incentive tourism and archaeology, a field that is constantly in search of funds.
Posted by Doug Matthews at 15:55 No comments: