OK, so now you know my opinion about Olympic boycotts.

From the point of view of an event producer, here is another reason why we in the event business should not boycott them. The Opening and Closing ceremonies are going to be unbelievable. I say this based on what I have researched about ancient Chinese events. I have absolutely no inside information. Everything indicates that the 5000 or so years of experience they have is going to count for something, and that something is going to be a spectacle like we have never seen before.

Think about this. Large public festivals and carnivals were common in ancient China, right from the days of the first emperor, Qin Shi Huang, who in 222 BCE decreed that everyone in the empire should engage in great drinking revelries to celebrate his conquest and unification of China. As with modern carnivals in New Orleans and Rio de Janeiro, a parade of floats drawn by horses or cows was one of the highlights. Some of these were entertain 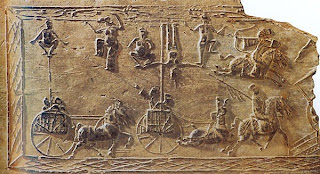 ment wagons on which acrobats performed flying stunts at the top of poles fastened to the wagons as in Figure 1 from the Han Dynasty (206 BCE to 220 CE) (Scarpari, 2006). And you thought Cirque du Soleil was the first to use acrobats on poles!


However, they paled in comparison to floats called "mountain carts" in the later Tang Dynasty. These were wagons that had superstructures hung with colored silks formed to resemble mountains, some up to four or five stories high.

Some festivals such as the Lantern Festival which is thought to have originated around the 1st century BCE, survive today. Even so, the grandeur of the past is still hard to match. In 713 CE “Emperor Ruizong had a lantern wheel 200 ft tall erected outside a gate of Chang’an. It was clothed in brocades and silk gauze, and adorned with gold and jade. When he had its 50,000 oil cups lit, the radiance burst forth like the blooms on a flowering tree. More than 1000 female performers wearing gauze trails, embroidered brocades with lustrous pearls, kingfisher hairpins, and fragrant makeup danced and sang under the lantern wheel for three days and nights” (Benn, 2002). 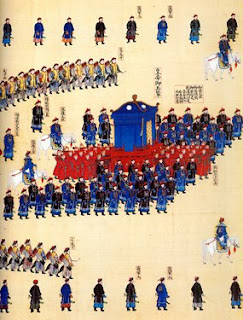 Precision and pageantry was even then the order of the day for most spectacles. Take for example, the entourages that regularly accompanied emperors whenever they ventured from the inner sanctuaries of the Forbidden City. During the Song dynasty (1067 to 1085 CE), Emperor Shenzong’s honor guard reportedly numbered 22,000 for state occasions. These included soldiers in full regalia carrying pennants, fans, banners, and weapons, musicians of all types, elephant-drawn chariots, wagons, and palanquins carrying the emperor and high-ranking officials (Thorp, 1988). Figure 2 illustrates a small part of such a procession from the Qing Dynasty (1644 to 1912 CE).


Stay tuned. I wouldn't miss these ceremonies for anything.