A producer works hard to create and bring together all of the elements of an event - and today's events can be technically complex. However, some producers are either not confident enough to bring the actual show together on cue, or may be spread too thinly with the added responsibility. In these cases, the producer may hire either a Technical Director (TD) or a separate "show caller." Show callers are usually people who have worked in theater and called cues in theatrical extravaganzas as stage managers (in the theatrical definition). They are seasoned and experienced in interpreting a producer’s requirement for the crew to make sure everything happens at the right time and with maximum theatrical impact, where appropriate. If a show caller is hired to run only the show, that person is coming in to the event “cold” with no knowledge about it whatsoever and must therefore be brought up to speed very quickly. We will assume this scenario for the following explanations, much of which has been provided courtesy http://www.simply-communicate.com/. For purposes of easy explanation, the show caller’s job will be divided into two main segments, pre-show and show.

Before the actual job of calling the show begins, a certain amount of preparation is required. If time permits, a separate briefing for the show caller is helpful and avoids any last minute panic onsite. The show caller then needs some time to prepare for the show by reviewing the material provided. This is typically followed by a rehearsal, particularly if the show is complex.

A show caller will need the following information which will usually be provided either by the Producer or TD:
Typically, there are some procedures that a show caller will use to prepare the script and himself/herself for the show. Much of it is personal preference, but the following are general guidelines:
A technical run-through of the script is a must if there are numerous technical cues and a long program, such as an extended awards show. The show caller can once again make it easier to run the show by considering the following during rehearsal: 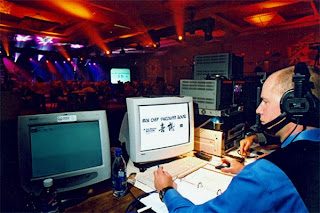 TD Calling a Show (Courtesy Darren Dreger, BC Event Management, www. bceventmanagement.com)
Finally, and most critically, speakers and entertainment need time to rehearse. They must understand how long they are allowed onstage because impromptu, unrehearsed speeches and entertainment acts that are longer than promised can wreak havoc with a show and cause it to go much longer than planned. A full or partial speaker and entertainment rehearsal can help to avoid this, by having the show caller consider the following:
Next time, we'll look at the actual show.
Posted by Doug Matthews at 08:53