Stress and the Event Planner

If you have been in the event business any length of time, you have come to realize that it is highly stressful: long days, evenings away from families, short lead times, grumpy clients, incompetent suppliers. It will ever be thus. How, then, do you live with this stress without physical or emotional problems? Over the years, I have acquired my own set of favourite methods or activities. Maybe the following will help you as they did me:

1. At one conference where I was speaking, an audience member asked me how I lived with the stress. My answer - and right at the top of my list - was that I always planned my work week around my fitness activities. In other words, physical fitness always came first for me. I literally put my daily workout into my day planner and that time was sacred. If someone asked me to attend a meeting at that time, I would say I was already committed. To me it was absolutely necessary to have that 1 1/2 to 2-hour period each day when I could just let my body unwind. And you know what? I never lost a client or had anyone complain.

2. Treat your body like a holy grail, not a disposable paper cup. This means more than just the daily workouts. It means eating and sleeping right. It has been proven, for example, that getting a good night's rest rather than pulling an all-nighter to study for exams is more successful for college students. The same goes for event planners. Resist the temptation to work to excess. Opt instead for a proper night's sleep. On the nutrition front, skip the temptation to eat fast-food when in a hurry or on the job. Instead, opt for bringing your own food from home, good energy food like fresh apples, dried prunes/dates/apricots, healthy sandwiches. Skip the high calorie soft drinks and opt for water instead. Well, OK, the occasional coffee did indeed keep me going in rough times, but I still tried to eat well.

3. Master technology; don't let technology master you. Although I realize how important cell phones are, I strongly suggest minimizing their use on the job (i.e. while at an event). This can be highly stressful. I have found that they seem to now be used often as an excuse for lack of planning. Try to have everything - and I mean everything - perfectly organized before beginning event setup. Don't arrive at a venue still wondering what time supplers will arrive or if they will arrive with the right equipment. That should all have been sorted out long before the day. For sure, a cell phone is great for onsite emergencies: someone is lost or delayed by traffic, but mostly, I firmly believe just about everything can be done beforehand. Likewise, don't use the phone as an excuse to multi-task and work on other events while you are onsite. Keep your focus and worry about those at another time. You don't need extraneous stress during an event.

4. Plan to take at least one good vacation every year - without your cell phone or laptop. Yes, it can be done. I should know. When I married my wife many years ago, we agreed that we would take an annual holiday - just the two of us, no kids - for at least a week or two. We have stuck to that. I never took a phone or computer with me on those holidays and never lost a client or had an insurmountable problem. It really is amazing what your staff can do if given the right responsibility and authority.

I could go on with other tips, but these have served me well. Yes, things were still stressful but not so bad that there was no escape.
Posted by Doug Matthews at 08:56 4 comments: Links to this post

Did you ever wonder how important symbols are to our everyday lives? Believe it or not, they are often the central focus of our many activities. They also form a key part of special events.

Sacral symbolism lies at the very heart of understanding ritual, and ritual, as I have mentioned before, is very significant in special events. As Paul Avis states, “At its simplest, a symbol means imagining one thing in the form of another.”[i] He goes on to say, “It belongs to symbols to mediate a reality or meaning that transcends the symbol itself. This need not necessarily be a supernatural reality, the subject of theology, the sphere of divinity. The transcendent realm may be the spirit of a nation, a tradition, a cultural legacy, an ethical or political ideal. But it always carries a value greater than the individual. The crucial point about symbolism is that there is no access to this transcendent realm apart from its symbols.”[ii] In other words, not only may a “sacred” symbol be religious such as the Christian cross or the star of David, it may also be a national flag, monuments, a company logo, or in the case of American football, cheerleaders, mascots, and team logos. In ancient spectacles it could be the coat of arms or symbol of a sovereign, crowns and headdresses, jewelry, ritual paraphernalia such as obsidian knives, special offerings or sacrifices such as bulls or goats (or humans), statues, chariots, weaponry, and much more.

When you think about the events we all organize in this industry, especially corporate events, it becomes apparent how important symbols are to their success. Product launches, sales meetings, incentive programs, conference opening and closing ceremonies, and of course all types of sporting events, all have at their heart some form of symbol: corporate logos, product shapes and colours, spokespersons, a charismatic president, even lifestyles. Are these really much different from religious symbols? I don't think they are. The rituals associated with them often mimic religious rituals in their execution. For example, I have produced numerous corporate events for companies such as Toyota, Mary Kay, IBM, insurance conglomerates, and pharmaceuticals and the reverence paid to the corporate culture is no less strict - or inspiring - than that of any mainstream religion. From the procession to dinner to the fanfare of a new product announcement to the climax of the president's "homily," the orders of service are uncannily similar. This is secular religion at its finest.

The subject has been studied to some extent by scholars, particularly over the last 20 or so years. However, I have not seen too much written about the similarities of corporate special events to religious events that incorporate many sacral symbols. I believe it is in our best interest when creating such events to bear in mind the close connections with religion and the ways in which humans react to religious or sacral symbolism. Being able to manipulate the event to take advantage of these connections might prove beneficial.

Yesterday I visited the open house at the new, expanded convention centre in Vancouver, Canada. It is a magnificent facility with one of the most beautiful settings in the world. Now, admittedly, that is a little biased because I have not seen all the other facilities. However, I am familiar with meeting spaces and this has been extremely well designed, with optimum opportunities for viewing a panorama of sea and mountains. Together with the older facility next door, the total space available puts Vancouver in a highly competitive position near the top of global meeting destinations. See my Flickr site for more photos at http://www.flickr.com/photos/showbizinbc/sets/72157616317479873/ 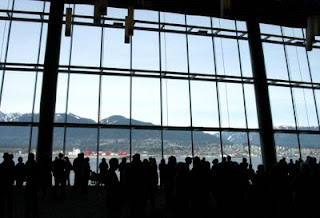 Posted by Doug Matthews at 08:46 No comments: Links to this post