The question of how many portable toilets, what kind, and where to put them is always a concern, particularly for large outdoor events. The keys to the successful incorporation of portable toilets into an event are essentially threefold:

1. Correct estimation of the number of units needed. The Health and Safety Executive (HSE) in the United Kingdom recommends that, when estimating the number of units required at an event, consideration be given to the duration of the event, the perceived consumption of food and beverages (particularly alcohol) by the audience, timing of breaks in entertainment performances, provision for children or elderly who make take longer to use a facility, and weather conditions and temperature. In addition, the ratio of women to men is essential to correctly estimating numbers. The figures below are combined averages of several sources (National Event Services, 2006; Government of Western Australia, 2004; and Rutherford-Silvers, 2004), and can be used for general estimates of toilet units required based on event duration (eight hours for both these graphs) and whether or not alcohol is consumed. Note that the straight lines in these graphs are the trend lines of the averages and it these lines that should be used. In addition to the number of toilet units, hand wash stations should be provided in the ratio of approximately 20% of the total number of toilets (i.e. for 100 toilets, 20 hand wash stations are needed). The Government of Western Australia (2004) in their extensive event guidelines, also further recommend that for more attendees:
For events with different durations, they have the following recommendations for units:

According to National Event Services, in the US, federal and state guidelines also require one ADA toilet unit for each “cluster” of toilets, which works out to approximately 10% of the entire order that should be handicapped units. Event workers and employees must have their own dedicated facilities that should be located near work areas, specifically backstage, near the mixer tower, next to catering areas and car parks, and near first aid and children’s areas. Toilets with hot and cold hand-washing facilities should be provided for food handlers. 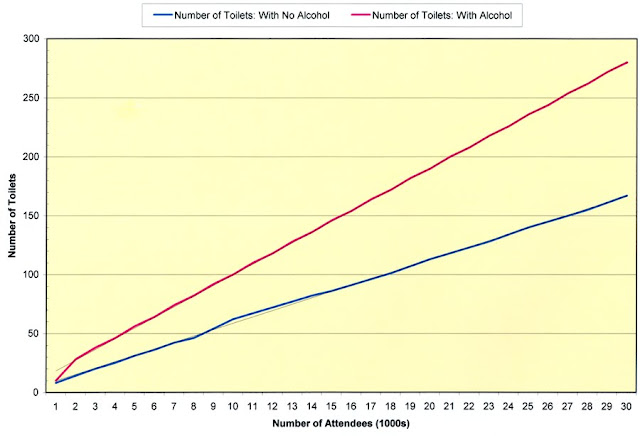 Portable Toilet Requirements for an Eight-Hour Event (Total Attendance up to 30,000) 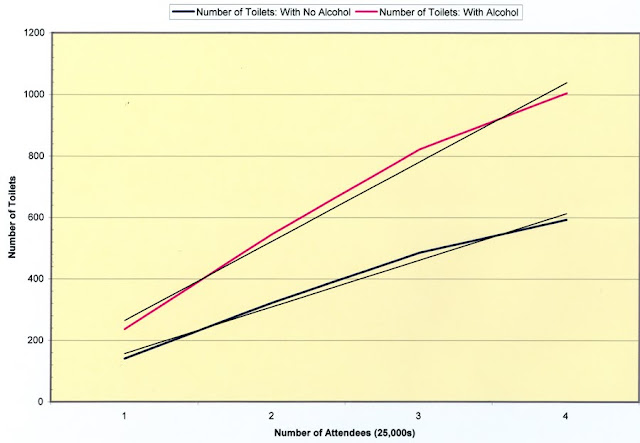 Portable Toilet Requirements for an Eight-Hour Event (Total Attendance 25,000 to 100,000)
2. Correct location of the units. Where possible, toilets should be located at different points around the event site to minimize crowding and queuing problems. Attention should be given to accessibility for servicing and emptying. This may include temporary roadways and dedicated access routes, subject to the site layout.

3. Regular servicing schedule. Depending on the type, portable toilet units have waste storage tank capacities ranging from about 150 liters (40 gal) to 250 liters (65 gal). On average, a single usage will deposit approximately 1.4 liters (.37 gal) of waste. Based on another average of 54 to 75 seconds per use (men versus women), smaller units may therefore require major service and emptying of toilet receptacles as frequently as every two hours, or as infrequently as four hours, but this may need to be monitored if some units receive heavier usage than others due to their location. At a minimum, units should be cleaned and checked for supply replenishment (e.g. toilet paper) at two-hour intervals, and a plumber should at least be on call for short events and on site for longer events. Major service procedure involves driving the service truck to within approximately 20 ft (6 m) of the portable toilet, pumping or evacuating the effluent from the portable toilet receptacle into the truck holding tank, recharging the portable toilet receptacle, and performing minor repairs to the portable toilet as needed.

Read more about toilets in my new book from Elsevier, Special Event Production: The Resources.