At some point in every event planner's career, especially if they own a small business, there will be a broken contract. In this case, I am talking about a contract with a client. We all hope it will never happen, but it will, even if you have clauses written into the contract to prevent it. Let's look at a typical example and keep it simple.

You have contracted with your wealthy client and they have sent the requisite deposit. The event goes well and you dutifully send an invoice for the remaining amount. The days go by then the weeks and you still have not been paid, for what ever reason. What can you do?

Now I'm not lawyer, but I'll give you my version based on experience and extensive reading. There are basically two avenues you can take. The first is called Alternate Dispute Resolution or ADR. It is usually the cheapest solution and allows the parties to sit down together to come to an agreement. There is also a much better chance that the planner/client relationship can be maintained. It includes negotiation, mediation, conciliation, and arbitration in increasing order of complexity, and decreasing amount of decision-making control by the parties. Event planners and producers should seriously consider ADR as a contract clause.
The second avenue for resolution is litigation, either in small claims court or in regular court if the amount in disute is greater than the amount allowed in small claims court. Every state or province has a specific limit for small claims.
The best way to settle breaches of contract is between the two parties directly with each one being willing to see the other's point of view. A little humility never hurt anyone and in the case of an event producer looking to establish a reputation, it just may help to save that reputation. That being said, if the breach involves only the lack of payment of the contract amount or part of it and all other services have been delivered as required, then the best defense is a continued, polite attack on accounts receivable, either personal or through a collection agency.

Good luck, and here's hoping you never have to go to court!
Posted by Doug Matthews at 08:46 No comments:

I have a fascination with ancient special events. Not only were many of them spectacular in their magnitude but many exhibited creativity and planning that we would not have thought possible at the time. Today's event planners would do well to take the occasional look backwards for refreshing ideas. I'm going to periodically present some of them in this blog so you can do that. We'll start at the beginning with an entry from my other blog about ancient celebration.

Nobody knows when the first celebration or "special event" occurred.

Our form of Homo sapiens, the anatomically modern version of “us,” appeared about 200,000 years ago. It would be preposterous to assume that in the chasm of time between then and now nobody had the wherewithal to dance, sing, or get together for a celebration. Indeed, no end of writers has found it mindlessly easy to conceptualize wild, orgiastic revels by our hairy, heavy-browed predecessors. But the evidence has been in short supply. That is until a fascinating discovery in 2006.

In that year, in the remote Tsodilo Hills of northwestern Botswana above the Kalahari Desert, archaeologists uncovered ritual objects in a hidden cavern known as Rhino Cave. These objects included a rock resembling the head of a huge python. Along with this, they dug up over 13,000 stone spearheads and tools, some more than 70,000 years old, the time of the Middle Stone Age. 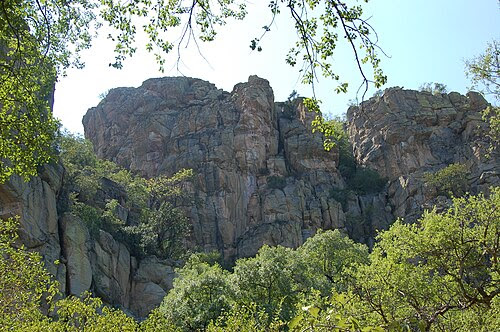 Tsodilo Hills (Photo courtesy Joachim Huber via Wikimedia Commons)
Associate Professor Sheila Coulson of the University of Norway made the discoveries. She speculated that the cave was an important one for ancient rituals. “You could see the mouth and eyes of the snake. It looked like a real python. The play of sunlight over the indentations gave them the appearance of snakeskin. At night, the firelight gave one the feeling that the snake was actually moving.” She also discovered a secret chamber behind the python stone. Some areas of the entrance to this small chamber were worn smooth, indicating that many people had passed through it over the years. According to her, “The shaman, who is still a very important person in San culture (the famous ‘Kalahari Bushmen’ indigenous to the area, and from whom we are all descended ), could have kept himself hidden in that secret chamber. He would have had a good view of the inside of the cave while remaining hidden himself. When he spoke from his hiding place, it could have seemed as if the voice came from the snake itself. The shaman would have been able to control everything.” 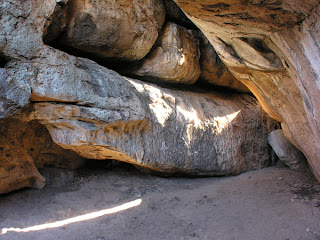 The sacred python stone during the day (above) and at night (below), as it may have been during worshipping. (Photos courtesy Dr. Sheila Coulson, Institute of Archaeology, Conservation and History at
University of Oslo) 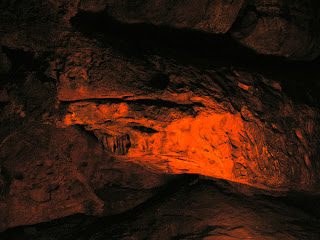 ﻿
If Dr. Coulson is correct, then this is convincing evidence for one of the world’s oldest rituals. For the small band who participated, it was more than ritual, it was a true "special event." Perhaps in coming years more such exciting discoveries will be made of even older celebrations.

References:
Posted by Doug Matthews at 09:04 No comments: