What is a Sound Check?

What is the purpose of the sound check and why does it take so long? This is perhaps one of the most misunderstood - but absolutely necessary - tasks that must be carried out for a special event to run without technical glitches, especially one with a large audience and complicated audio requirements. Event producers must understand that sufficient time has to be allotted to accomplish it. One to two hours - or more - are not unusual for a complete check.

A thorough sound check is done for several reasons.

Now that the sound check is complete, it’s time to open the doors and start the event (after crew dinner break, of course)! 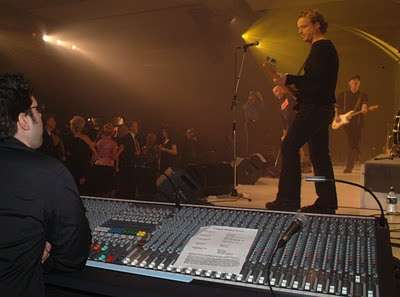 Posted by Doug Matthews at 17:10 No comments:

One important technical component of special events that is very misunderstood or, more accurately, not understood at all by a large majority of event planners and managers is the audio system. Why is this important? Well, think of yourself as a doctor. How can you successfully know how to treat people if you do not understand how all the components of the human body work? How, then, as an event planner, can you give your client the best event experience without understanding how the various components of the event work?

I'm going to use the next couple of blogs to review what happens to sound from its origin onstage to the final audible sound that emerges from the house speakers and is heard by the audience. For the purpose of the exercise, let's assume we are working with a nine-piece show band on a large stage in a hotel or conference center ballroom.

Here is what a typical stage plot for the band might look like when they (the band) give it to the event manager who forwards it to the audio company. 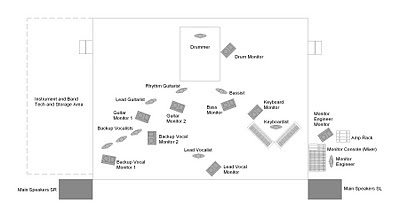 With the stage plot in hand, the audio company figures out what equipment they need to successfully make the band sound great. They then set up the room for this and the end result will be something like the following diagram of audio equipment locations in the room (not to scale). 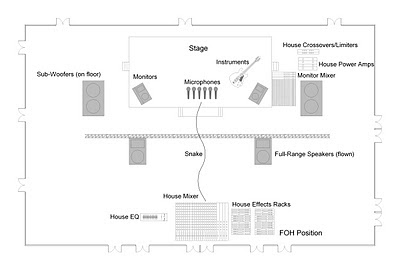 As you can see, there are quite a few extra pieces of equipment which have been added to what started as a simple request from the band. Let's look at what these are, but more importantly, why they are needed to convert the band's sound to one that can be heard by the entire audience. ﻿We'll do it by following what we call the audio signal.
First of all, the audio signal begins as a sound wave within the INPUT GROUP of equipment, most of which is generally found onstage. This group of equipment includes vocal and instrument microphones, which convert sound waves like a vocalist's voice into tiny electrical signals. Other members of this group include instrument DIs (direct input boxes), keyboard mixers, and occasionally CD/DVD players controlled by performers.
Second, the audio signal (now comprised of small electrical signals) goes into a transformer-isolated "snake" that sends one set of the same signals to the main mixer, and one set to the monitor mixer. The snake is really just a long "extension cord" that connects all the signals onstage to the equipment the audio engineer uses at the audio control position at Front-Of-House (FOH), usually at least 30 ft across the room. It also connects the onstage signals with the monitor engineer position near the stage. He/she is the person who controls the sound the musicians use to hear themselves because they cannot hear the main room speakers onstage since they (the musicians) are physically behind the main speakers.
Third, the audio signal is processed in the SIGNAL PROCESSING AND ROUTING GROUP, by the main house (FOH) mixer, located at that position typically 30 ft or more across the room from the stage, where it is raised in strength, and has various effects like reverb added in the house effects racks, then is looped back to the main mixer.
Fourth and last, the audio signal goes from the main mixer into the OUTPUT GROUP, in which a house equalizer adjusts frequencies, a house limiter controls the maximum strength of the signal, house crossovers split it into different frequency bands, power amplifiers boost its strength, and finally the house speakers which convert it back into sound waves that the audience hears.
That's a very brief and simple overview and no doubt some of the terminology is still confusing although you have probably heard the terms before. In my next post, I will review what is entailed in a sound check and what the audio engineer does during an event, as well as trying to explain in a little more detail what the purpose of all this equipment is.
Posted by Doug Matthews at 17:25 2 comments: