Another Look at the Last Supper

Since this is Easter Week and Thursday evening is the traditional time when the Last Supper would have been celebrated, and since I last talked about banquet seating, it seems an appropriate opportunity to discuss the seating and style of the Last Supper.
In reality, according to customs at the time of Christ, the seating arrangement and style of banquet would have been nothing resembling the famous painting by Leonardo da Vinci. In fact, it would have probably been in keeping with the Greco-Roman banquet. This formal style of banquet originated with what is known as the symposion, an ancient Greek social institution, usually reserved for males. Think of it as the prototype for today's business meeting, except with a lot more drinking and entertainment. The first part of the meal was called the deipnon, the actual eating part. The second was called the symposium. During this second part, guests lingered over wine (diluted with water in the traditional Greek fashion) and enjoyed entertainment generally in the form of music and dancing.
This style of banquet was adopted by the Romans and and in their inimitable way, changed to suit their needs. It was in place at the time of Christ. There were many common features of the banquet, but four important ones included:
The following images portray the style of the symposium and the later Roman banquet. 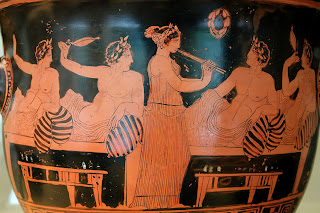 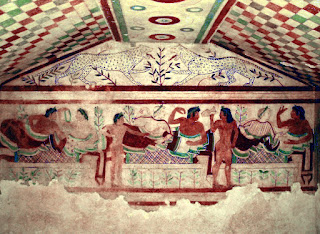 Roman banquet
Worth noting from these images is the closeness of the diners to each other, often - in the case of the Roman banquet - even sharing a couch amongst three or more. It is undoubtedly this closeness that aided the social bonding so inherent in the ritual practice of the banquet. It solidified group identity, as did the sharing of wine and bread.

The seated position of the diners, notably angled and with feet extended to the back of the couch, enabled their feet to easily be washed by servants, as was the custom, and which was a part of the Last Supper. Of course Christ took the part of the servant.

With respect to the seating arrangements, the later Roman banquet which was likely the one most closely resembling the Last Supper, used three tables, the lectus summus, lectus medius, and lectus imus. They were set up in a horseshoe shape around a room known as the triclinium or three-couch room. Seating was arranged according to tradition and using positions that numbered starting at the left-most end of each couch as one faced the inside. The host originally sat at position #1 at lectus summus or more commonly at position #3 at lectus imus. That would probably have been the position of Jesus. The guest of honour or locus consularis was position #3 (or the last position) at lectus medius. This would probably be the position of Judas at the Last Supper, or immediately to the left of Jesus.

According to the gospels, John at one point leans toward Jesus at the urging of Peter and asks him who will betray Jesus. With the disciples in these positions, it would be very easy for Jesus to whisper back without being heard by Judas who would be sitting on the other side of him. Thus, John was likely at position #2 at lectus imus and Peter probably at position #1 at lectus summus (remember also a place of honour), across the dining area from John, making his possibly surreptitious motion easy to be seen by John because of the way they would be reclining.

The following diagram depicts this layout. 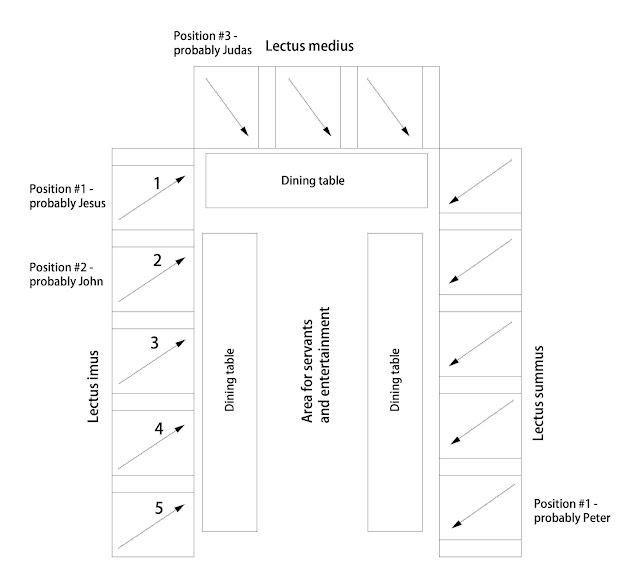 Of course, we will never know exactly what transpired or where everyone was, but it is interesting to look at the Greco-Roman tradition and make educated guesses.
Happy Easter!